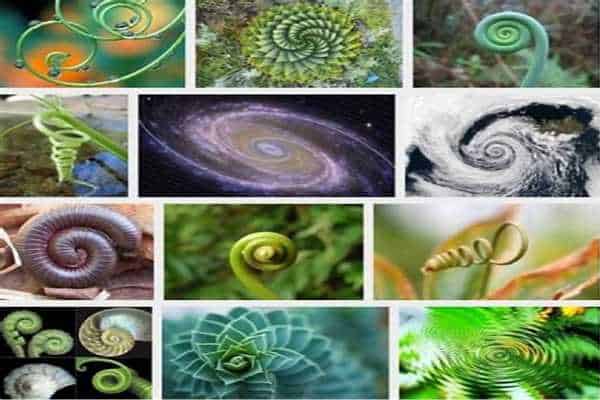 If you look for it, you’ll find this pattern everywhere. What exactly is the meaning of the spiral symbol? It’s a building block of nature and an ancient symbol used to convey powerful messages.  Learn about how you can use this in your path.


This shape is considered an Archetypal or universal typology with several meanings.  It is used in many different cultures to convey the concepts of energy and time.  Typologies can evoke deep and sometimes unconscious responses.  The responses trigger various emotions.

The Meaning of The Spiral Symbol

Because it is a universal typology, its meaning depends on your relationship to the shape.  For example, if you experienced a devastating loss because of a hurricane, this symbol may evoke negative emotions.  On the other hand, if the shape reminds you of walking on the beach with someone you love and finding a seashell with this shape, it may evoke positive feelings.

“A circle is the reflection of eternity. It has no beginning and it has no end – and if you put several circles over each other, then you get a spiral.” — Maynard James Keenan

This iconic spiraling shape appears in nature and in the first art forms.  It can stand alone, which we find in many ancient cave paintings and carvings.  We also see the spiraling structure with other symbols, characters, and images that make up themes which are icons that embody universal meaning.  The shape and its prevalence in art and nature make them immediately recognizable.

When this shape appears in dreams, it is often a portal to another dimension.  This icon is a part of the culture as exemplified by the TV show, The Twilight Zone from 1959 featured spirals and the opening of different dimensions.  You can watch the opening and closing themes on YouTube. (1)

Spirals are just one of the iconic typology symbols.  It is unique because we see it occurring in nature.  Other universal typologies represent classic themes.  The cross, the circle, and the triangle are among the most used human-made symbols.  The hexagonal shape of the beehive is another such symbol.

Many ancient traditions use the spiraling form as a central point.  The shape suggests a moving labyrinth.  The symmetric growth of the form leads to or from the Source.  Even as a solid form in rock, it appears to be moving. (2)

“The spiral symbol is an archetypal symbol that represents cosmic force.” ― Carl Jung

“When the symbols are ‘public’ they usually act in an oblique manner, revealing themselves as archetypal symbols, which though familiar, have their central meanings obscured as is usual in esoteric imagery.” — Kenneth Coutts-Smith

Many people report seeing this archetypal symbol rotating in their eyelids when they close their eyes.  It’s an indication that the meaning of the spiral symbol is embedded in our psychic structure.  (3)

We can use a pattern as a  focal point for everything from meditation and contemplation to energy collection and hypnosis.  The hypnotic effect of this particular shape is no accident.  It suggests that this pattern is part of the structure of memory.

The shape is a powerful force beyond the mind.  Our galaxy and many other celestial forms are moving spirals.  (4)

“What is more of a symbol of eternal growth and change than the Goddess? The eternal spiral of creation. Coiled like a serpent, our Shakti energy sits, waiting to be awakened within all of us.”  ― Emma Mildon, Evolution of Goddess: A Modern Girl’s Guide to Activating Your Feminine Superpowers

Harnessing The Meaning of The Spiral Symbol

Since this shape is a fundamental building block, it makes sense to use this pattern to express and convey important messages and themes.   We see nature doing the same thing, from flowers to the Nautilus Shell.  We can spot this symbol in the swirling energy vortex of storms and tornados.

These examples in nature help us to recognize the importance of this structure.   Could it be because we are on this tiny planet whirling around one of 100 billion suns in a spinning spiral galaxy?

“A circle is the reflection of eternity. It has no beginning and it has no end – and if you put several circles over each other, then you get a spiral.” ― Maynard James Keenan

Make this symbol your own.  Draw it, look for it.  See it when you close your eyes.   You can find this marvelous corkscrew form in the art of almost all cultures, from ancient primitive rock carvings on all continents to today’s corporate logos. They show up in Celtic art, Native American petroglyphs, Nazca earthworks, Arabic architecture, Japanese rock gardens, Hindu spiritual texts, Australian aboriginal paintings, and African art. (5)

“The Earth is alive and contains the knowledge you seek. It is your consciousness that determines what it reveals. How to access this knowledge? And where are the keys to open it and make it yours? The Earth speaks. Love her, honor and respect her and she will reveal her secrets.” — Barbara Marciniak

You can develop your own meaning of the spiral symbol.  It is versatile and flexible.   It can represent everything from our spiritual journey to the infiniteness of the Universe.  We associate it with the cycles of life and time, the seasons, the processes of birth, growth, death, and then rebirth.   This symbol represents nature’s creative power cascading from its center, expanding outward into infinity.

Surprisingly, no single religious or political group claims exclusive rights to the shape. Therefore, the meaning of the spiral symbol is diverse.  It is prolific in many ancient Shamanic practices to facilitate entrance into the dreamlike state of  Shamanic Consciousness.  Hypnotists use this form to induce a similar trance-like state.

Because this shape is prevalent remains nonsectarian, or maybe pan-sectarian. In this way, it belongs to everyone as our cosmic connection. Some consider this symbol of the ultimate spiritual journey. It also represents the evolutionary process of learning and growing. Life doesn’t proceed in a straight line but in a spiral.

2) Create “Your Own” Meaning and Rituals

Create a ritual to focus on the power of this symbol.  For example, walking in a labyrinth is a tradition in many cultures.  Create your spiral labyrinth with stones. It’s an exercise many cultures use to symbolize the inward journey.  Some are large enough that waking them creates a hypnotic effect.   It is part of a psycho-spiritual process for centering consciousness.

“Create your own myths; that is how the gods got started.” — Stanislaw Jerzy Lec

Create artwork using this archetypal symbol as inspiration.  Let the shape guide your intuition and discover your cosmic connection.   Behold the power and mystery of the sacred spiral. Have a Reiki healing session.  The healer will use the spiral in several forms as part of the healing technique.  Learn more about the mathematical precision of this form.

You can find spiral jewelry for necklaces, earrings, or key chains.  Wear one as a reminder of the spiraling cosmic energy of our Universe.  Use it as a reminder to engage in your spiritual practice.

This form often follows the geometrically expanding proportion known in mathematics as the Fibonacci numbers, the Golden Ratio (6), and the recursion method used in computer science.  Some call this an equiangular and geometrical spiral.  It is a precise mathematical progression where “the angle of the radius” increases at the same rate as its polar angle increases.

We may not understand the geometry, but almost everyone can spot the symmetry of this shape.  We can tell if it is in perfect alignment without measuring.  Our ability to identify with precision speaks to our cosmic connection with this symbol.  Try it yourself.  Find a picture of a spiral.  See if it flows in a perfect progression.

Develop your own meaning for this incredible symbol.  Make it your own. The symbol’s meaning is almost limitless, and it’s likely why it is prolific in many ancient cultures. There’s no doubt about the utility and power of this archetype symbol.  But it is readily available and easy to create.  We can put it into motion with the turn of our hands.

(1) The Twilight Zone Opening and Closing Theme Features the spiraling vortex and doors creating spirals to open other dimensions: https://www.youtube.com/watch?v=kGZuzNm05do

(2) A Review of Transpersonal Theory and Its Application to the Practice of Psychotherapy: https://www.ncbi.nlm.nih.gov/pmc/articles/PMC3330526/

(4) Motion Law of Graviton in Three-Dimensional Space and Its Influence on Star Distribution of Spiral Galaxy: https://www.scirp.org/journal/paperinformation.aspx?paperid=51743

Want to Learn How to Unplug from the Matrix?

Does the Soul Exist — Proofs For the Human Spirit