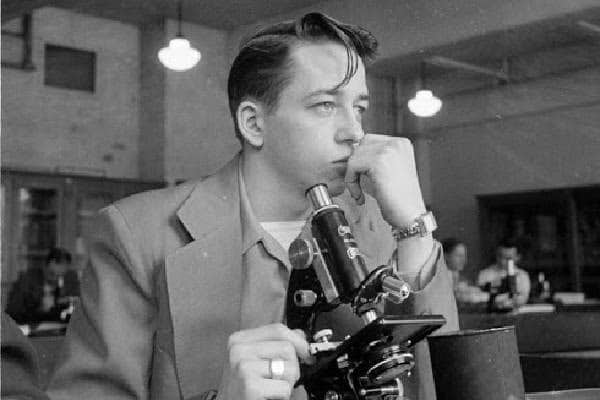 Faith cannot overcome fear; it merely substitutes another fear. Only facts overcome fear.  Find out why this is true.


“It’s a fact that people are afraid of what they don’t understand. And most are too lazy or ignorant to find out more.” ― Richelle Mead, Silver Shadows

When we face something fearful, we engage our primitive brain, our monkey brain, which is an integral part of our nervous system, it helps us react quickly to danger.  The monkey brain pumps adrenaline into our systems.  Adrenalin is harmful to our higher brain functions, so it shuts off circulation to the frontal cortex to protect it.

The problem is, we need to engage our higher thinking functions to make better decisions, if not we react out of fear instead of with a calculated response.  The key is learning how to spot the sources to avoid being manipulated by fear.

Mythology, superstition and legends are the basis for the three most popular religions.   Christianity, Islam and Judaism are copies of the Mediterranean region.  These mystery religions come from Assyria, Babylon, Egypt and Persia.

Myths and legends can be helpful if you use them in the right way. Some fairy tales and legends contain spiritual and practical lessons.  They use metaphors, analogies, and word pictures to communicate underlying principles.

The problem arises when you mistake the metaphors and analogies for facts.  This happens when religion substitutes folklore and mythology for facts and evidence, you miss the lesson of the story and take things out of context.  It is especially harmful when religions link our primal fears to these myths.

This misdirection is no mistake, it’s how they gain and maintain control. Religion and political which triggers fear and anger is a mind control tactic. It keeps people in the fight, flight or freeze mode. You are more susceptible to their programming when you are in a highly emotional state.

Emotional and sensitive issues are the key to programing irrational and violent responses, which is the formula Cambridge Analytica used to alter the outcomes of many elections.  It culminated in the tactics used in the Presidential  Election of 2016 in the USA. (1)  It is proof of how propaganda can influence elections. The data was not truthful; it was emotional.  They targeted those most susceptible to create social acceptance. Sadly, it worked.

“Is it not a species of blasphemy to call the New Testament revealed religion, when we see in it such contradictions and absurdities?” — Thomas Paine

One cannot argue facts with a believer, for facts are not part of the equation in their decision making.  Their decision is based on misplaced confidence and hope, which are emotional responses to fear and anger.

““Religion is a belief in invisible beings, inaudible voices, intangible entities, undetectable forces, and events and judgments that happen after we die. It therefore has no reality check. And it is therefore uniquely armored against criticism, questioning, and self-correction. It is uniquely armored against anything that might stop it from spinning into extreme absurdity, extreme denial of reality and extreme, grotesque immorality.” — Greta Christina

Mockery and making fun of yourself and your crazy ideas is one way to change your perspective.  But, in some cultures, mocking or making fun of their imaginary friend is a capital crime punishable by death.  To be a non-believer is a capital offense.   (2)

“Mockery of religion is one of the most essential things because to demystify supposedly ‘holy text dictated by god’ and show that they are man made.  What you have to show is there internal inconsistencies and absurdities.  One of the beginnings of human emancipation is the ability to laugh at authority.  It is an indispensable thing people can call it blasphemy if they like. But if they call it that, they have to assume there is something to be blasphemed — some divine work, well I don’t accept the premise.” — Christopher Hitchens

Faith is a Substitute

Faith cannot overcome fear; it substitutes another fear which it can monetize.  Instead of facing the object of our fear, belief replaces it with another.   The most misused fear is our existential fear of death.

Our existential fear of death should drive us on a journey of inner discovery.  Unfortunately, many people fall for the counterfeit answer from religion.  It comes in the form of Afterlife beliefs.  Now we fear the loss of life and our place in the afterlife.  Will it be an eternity in heaven or hell?  No matter which religion you pick, you will be wrong.  Those who believe in other faiths think you are wrong. We are all going to in someone else’s religion.

Fear is a trigger.  Fear engages our primitive brain, which activates our fight, flight, or freeze response.  It helped us survive by reacting in the wild, but this tactic is counterproductive when we think about the best answer.  Belief cannot overcome fear. Belief is another name for denial. 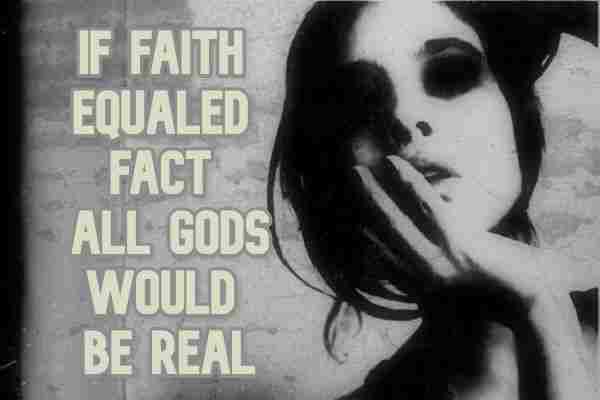 Faith is the belief in religious mythology over facts. If faith equaled fact, then all Gods would be real.  Unfortunately, this is the logical conclusion of faith.  Some people are proud to say. I live by faith. And they are proud of such a declaration because it is a part of their false identity.  It is like putting a blindfold on common sense and logic.

It’s dangerous not only for the person who believes but also for everyone in their circle of influence.  after all, it takes a lot of work and self-hypnosis to maintain this worldview. To maintain a mindset based on mythology means learning to reject ideas.  It requires conscious blindness.  This is the automatic rejection of anything which does not support the systems folklore and mythology.  It is why blind faith cannot not overcome fear.  Faith is a counterfeit answer to reality, it substitutes one fear for another.

A better way is to use facts.  Follow the advice of science; this is a better antidote.  If you find yourself caught up in negative feelings, stop. Regain your emotional equilibrium and think instead of just reacting. The emotional check-in process which helps you regain emotional equilibrium.  It can help if you are aware enough to recognize when your emotions of fear and anger are triggered.

Facts overcome fear when we can act responsibly and deliberately.  We are not in denial of a crisis; instead, we learn to make better decisions.  We learn to recognize those who are trying to manipulate with a secondary gain or hidden agendas.

In the example above, we talked about our existential fear of death.  Seeking our personal truths and discovering our place in life are where we find genuine answers.  We learn to value this life, not the hereafter.  Facts overcome fear when we grasp that faith cannot overcome the anxiety of our eventual demise.  Belief in fairy tales and mythologies are substitutes that religion uses to make us customers.

Religion always tries to insert its prejudiced beliefs into politics.   In the dark ages, religion had complete control over much of the world.  It made the Chuch the most powerful entity in Europe.  Many people would like to see us return to the dark ages.  Religious fanatics and extremists have infiltrated governments to install Draconian beliefs as law.

Western religion tries to dominate the arena of spirituality to control the narrative. They inject every spiritual word with their own meaning. They contradict their own holy texts repeatedly. For instance, Jesus was a rebel and openly the organized religion of Judaism. He told people to find their own path. Then his followers turn around and created a religion in his name. The same thing with Mohammad and those who formed Islam.

Don’t get caught in their propaganda and substitute one fear for another.  Belief and faith cannot overcome fear.  They are counterfeits that help make you a customer. You cannot learn about yourself by pretending.  The belief in fairy tales is a dead end.   Spiritual growth is an inward journey, it has nothing to do with organized religion.

Don’t underestimate the power of faith. It is a slippery slope leading to greater and greater levels of irrational thinking. Faith substitutes one fear for another fear which they control. They substitute the after life for the existential fear meant to propel our inner quest.

Whereas facts and evidence are the building blocks of sound thinking.   Applying common sense and logic has brought about all the benefits of living in the modern world.  Unfortunately, we have yet to eradicate the effects of 1st century dogma that create world tensions and sparks violence.

(2) There Are 13 Countries Where Atheism Is Punishable by Death: https://www.theatlantic.com/international/archive/2013/12/13-countries-where-atheism-punishable-death/355961/ 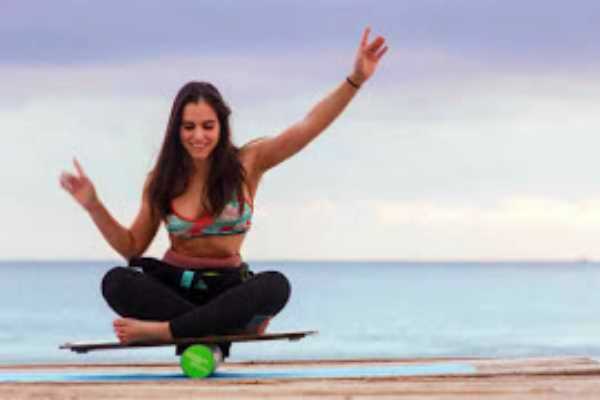 Calm the Active Mind — The Emotional Check in Questions and Actions 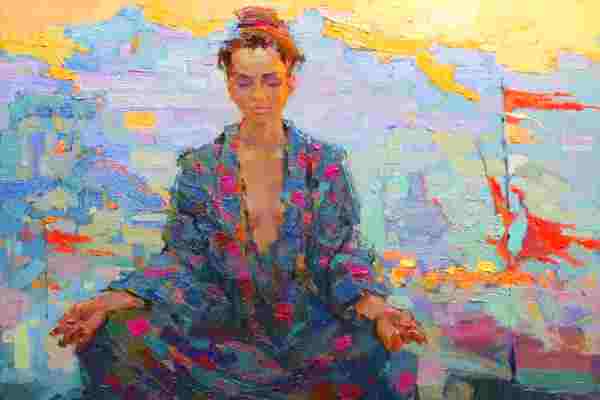 Mystical Alchemy — The Alchemy of Love a Divine Substance 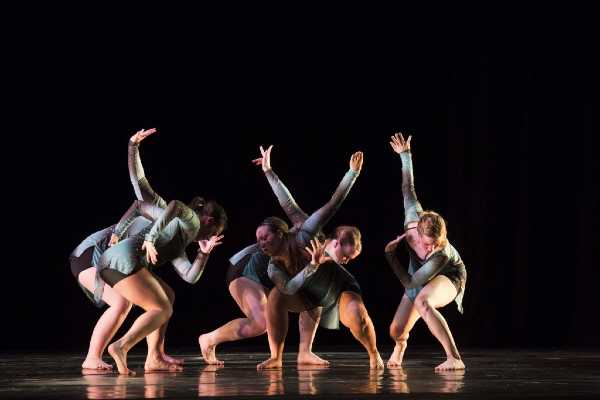