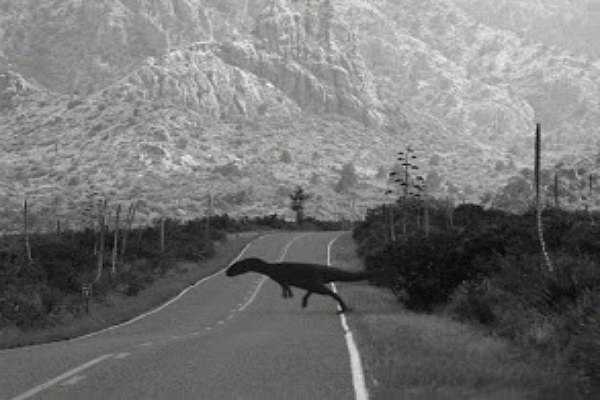 Look, is that a dinosaur crossing the road? It turns out reality is a lot more flexible than we think.

The questions are, is it possible?  Or could it be real?  Would we see a dinosaur cross the road if it existed, or would your mind simply ignore it?  If you’re an aficionado of people like Carlos Castaneda (1), then you probably would answer, “yes.” Don Juan, Carlo’s teacher, would use an apparition like this to shock you to the next level of consciousness.

A Velociraptor — What’s Next?

What do you think is real? Once you explore non-ordinary reality with techniques like meditation and the Shamanic Journey, you understand we cannot answer the question with a simple “yes” or “no.” The boundaries between ordinary and non-ordinary experience, not a static boundary.  We know this from practical experience.

The transition from waking to sleep states of consciousness is not something we notice unless we train our attention.  When we meditate regularly, we expand our awareness and become more aware of this transition.  We know other levels of perception make it possible to see what others do not.

So, a more accurate answer about our dinosaur crossing the road would be, “that depends.”  No doubt about it, a Velociraptor is as real as any imaginary friend in any popular religion.  However, our cultural narrative tells us what is acceptable to expect and what is not.  We know for sure that these creatures existed.  There is actual evidence of their fossils.  This is more than we can say about most religions.

We believe time separates us from the scene depicted in the photo with the dinosaur.  But we understand time is also not a constant. Time can be bent by gravity and speed.  So, is it a possibility? Does our cultural narrative blind us to this and other opportunities?

Phenomenology and a Velociraptor

Those of the “name-it-and-claim-it belief” persuasion would also answer, yes, we could, but perhaps it wouldn’t be prudent?  And many would say that the word-of-faith movement (2) is really a later revision of Edmund Husserl’s theory of phenomenology (3).  Proponents of phenomenology would say it is certainly possible…”If it can be perceived, then it can be achieved.” All possibilities are available to us through the subjective structures of consciousness.

We can’t argue against the fact that everything we have created was first a thought in our imagination. Our thoughts have brought everything into existence. To find a “unifying theory” (4) that explains the connections between the various physical sciences was the goal of Albert Einstein (5).

However, science has run into dead ends with its investigation into particle physics (6) and DNA (7).  These only contain the “raw” materials, but not the answer to how they are put together. We do not know what is telling the energy to form into specific patterns we recognize as matter.  We do not know what is directing these complex molecules to arrange themselves.

It’s like taking apart a radio to find the music inside. The music isn’t inside the radio. The radio is just a receiver. The intelligence that is creating the music comes from other sources.

The intelligence which has the ability to order reality is something Rupert Sheldrake calls Morphic Resonance (8). Mr. Sheldrake postulates that this Morphic Resonance is the unifying field. This is what Einstein sought to articulate. It is this mysterious force that eluded his ability to quantify and articulate.  Like many of his other theories, he had confidence in their viability before proving them.  This is the supreme force that philosophy and religion have given various names, including God.

Is this force something that we can manipulate or influence? If so, are there boundaries to our influence? All of this begs the question, what is reality?  Can we change our experience of reality with our intent, faith, or some combination of ritual or process? Is, or could Velociraptor Canyon be a reality? It all depends upon where you draw the boundary between imagination and creation.

If this article resonates, there are more on our blog. To find out more about our organization, see our page FAQ.  Register on our site to receive discounts on training and unadvertised material. We comply with all GDPR guidelines and never share or sell your contact data.

Interested in spiritual exploration?  Check out the blended learning process at the core of our teaching process. It reflects what Joseph Campbell called the Hero’s Journey (1).  Our learning options include both face-to-face and virtual learning sessions.  Please consider donating and supporting our mission.