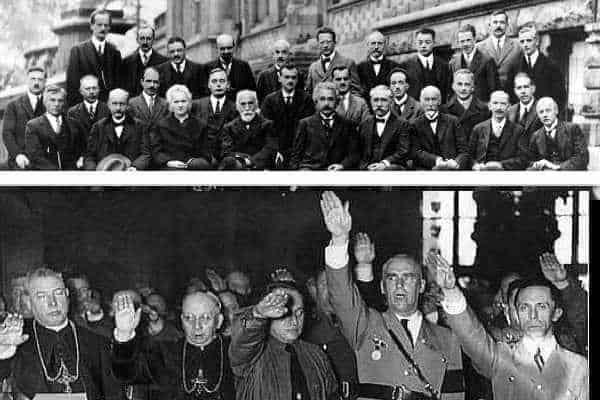 
The picture tells the story.  It’s a clash between science and religion. Let’s review the top portion of the image first.

Support Those Seeking the Truth

The top of the picture is a group of famous scientists from the 1940s.  People like this are responsible for developing our modern world. They give us advances in medicine and medical treatments to engineering and electronics.

Those who seek the truth using evidence include all branches of scientific inquiry.  There are several scientific branches of investigation, everything from archeology, botanists to physicists.  Any person or group contributing to help humanity is worthy of respect and support. We support those seeking the truth using verifiable evidence and processes.  And we reject those preaching what they claim are truths.

The scientific method is a system of inquiry that uses evidence to reach conclusions.  It is a systematic process with four basic steps.

This process involves deriving predictions from data to form a hypothesis.  It is how those seeking the truth come up with conclusions and predictions about how things work.   It’s a never-ending process.  They continue to carry out experiments based on those predictions to see if the results are repeatable.  They expand their knowledge and revise conclusions when finding new data.

A hypothesis is a prediction of how something will act. It can be narrow or broad—scientists test theory by conducting experiments. Under modern interpretations, a scientific theory must be falsifiable. It means the hypothesis must be something others can replicate.  This process helps us learn how to reject those preaching fiction as truth. If there is no proof, the conclusions are invalid.

The study of logic is the first tool we use in our group practice, but these methods help anyone seeking the truth. We encourage our participants to create a reminder on their smartphones to review these tools every month.  It’s essential to keep them fresh in our minds, and that’s when they become helpful in spotting ploys and deception.

The first tool is Logical reasoning, which summarizes the essential use of logic in language.  It shows how people misuse language to sell us ideas and beliefs. Next is spotting logical fallacies. This module provides practical examples of the most common logical fallacies. The last module, the truth-seekers axioms, ties everything together by contrasting how science and mythology differ in their approaches to presenting the truth.

For that reason, we recommend you respect anyone who seeks truth for themselves. Also, respect anyone with the courage to pursue truth.  It is possible to do this using spiritual technologies passed down through the generations.  These ancient tools are all about consciousness development.

Everyone has a unique path to awakening.  We have unique spiritual gifts, and we are on different timetables. Awakening is a process.  We of accessing the spiritual gifts are sleeping in our DNA.  When we open them, it sets our spiritual walk into motion.  It opens our minds to new potentials.

Accessing these gifts was the central goal of many ancient cultures. We enjoy the benefits of generations of research that provides us with many powerful consciousness development tools.   These tools support those seeking the truth.

These tools stand up to the test of science.  They are repeatable experiential phenomena. Higher states of awareness also have unique, measurable physiological signatures. They differ from waking, sleeping, and dreaming.

You do not need to believe in or follow a religion to use these tools. All you need to do is follow the process.  Most of these tools come from Eastern traditions.  Their focus is on exploring consciousness and developing human potential.

You will find this eclectic in other systems.  For example, Gurdjieff’s approach was to adopt what has already proven effective.  After all, human physiology hasn’t changed in thousands of years.  So, the work of the ancient pioneers stands the test of time.

Spiritual technologies are methods for exploring human consciousness.  These methods come to us from cultures worldwide, and they comprise a diverse body of practical mental tools.  You can use these tools to develop your potential, open spiritual gifts, expand awareness, and reach higher states of consciousness.

We select the best of these ancient methods for our blended learning method.  These processes are time-tested by generations of use, and they stand up to the rigorous tests of science.

The techniques we use are repeatable processes, and several produce measurable effects on our physiology.  These changes include increased brainwave coherence, lower heart rate, and increased skin resistance. These changes prove these states of consciousness are different from waking, dreaming, and sleeping.

Anyone can use these processes to develop their full potential.  They do not require faith or belief in any religious doctrine. All you need to do is follow the process, and it’s just like following the recipe for baking a cake.  If you combine the right ingredients in the right way and you get something delicious.

The more of them you use, the faster your progress.

The above processes differ from beliefs derived from mythology and superstition. Now let’s review the bottom portion of the picture.

The bottom portion of the picture is a group of religious and political leaders from Germany in the 1940s. These are people who profess to know the truth.   But their assertions are based on mythology, superstition, and the misuse of argument.  It’s precisely what the most popular religions use to support their contradictory doctrines.  These religions are the Semitic religions of Christianity, Islam, and Judaism, with over 4 billion followers.  These systems are the rebranding of earlier mystery religions of the Medditrainian.   In the bottom portion of the picture above, we see the Catholic Church saluting with some Nazis.

These are two extremist groups that joined forces, projecting the idea that they held the truth.  When, in fact, they were using self-hypnosis and group hypnosis manipulation tactics that prey on people’s basic fears.  They use insecurity and fear to build an extremist base that took over the government.  It blamed minorities, immigrants, and the disabled for their problems.  These groups became the scapegoats, which allowed them to merge with power.

The Semitic religions are the rebranding of Egyptian, Babylonian, Persian, and Assyrian mystery religions. One source of this data comes from their internal documents. The Catholic Encyclopedia from 1907 is one of the best resources to find information not meant for public consumption.  Several other external sources also show this rebranding and assimilation of these superstitions. See the resources below for our favorites.

“Symbolism in a greater or lesser degree is essential to every kind of external worship. And we need not shrink from the conclusion that in the matter of baptisms and washings, of genuflections and other acts of reverence, of lights and sweet-smelling incense, of flowers and white vestitures, of spiritual unction’s and the imposing of hands, of sacrifice and the rite of the Communion banquet. The Church has borrowed without hesitation from the common stock of significant actions known to all periods and to all nations. In such matters as these, Christianity claims no monopoly or originality. — The Catholic Encyclopedia and International Work, Vol. 14 (1907).”

We recommend that you reject those preaching fiction as truth.  These are people claiming to have the “truth.” Reject any group that claims to have preferential treatment based on their mystical relationship with an imaginary entity.

This article should prompt essential questions.  Which group do you support?  Does the content of the article trigger a negative emotional response?  It is possible, especially if you are a member of one of the Semitic religions.  If this is you, we recommend asking yourself if you support those seeking the truth? Or do you follow those preaching fiction as truth?  How do you decide who to support?

Joseph Campbell & Joseph Campbell’s book The Hero’s Journey, Wikipedia
The Oxford English Dictionary
The Catholic Encyclopedia and International Work, Vol. 14 (1907)
The World’s Sixteen Crucified Saviors by Kersey Graves, 1881
Mystery Babylon the Great, The Mother of Harlots and Abominations of the Earth, By Darrell W. Conder, 1993
Mystery Babylon and the Lost Ten Tribes in the End Time, by Darrell Conder, 1990
The Mythology of all Races, Volume V, Semitic, by Stephen Herbert Langdon, 1931
The Mythmaker, Paul and the Invention of Christianity, Hyam Maccoby, 1986
Messiahs: Christian and Pagan, Wilson D. Wallis, 1928
The Origins of Pagan and Christian Beliefs, Edward Carpenter, 1996
Bulfinch’s Mythology, The age of fable, the age of chivalry, legends of Charlemagne,1860
World Scripture, a comparative anthology of sacred texts, a project of the international religious foundation, 1995

True Autonomy — Living Free as Possible
Think You Are Awake? — Let's Find Out
Eight Ways Gratitude Can Transform Your Life 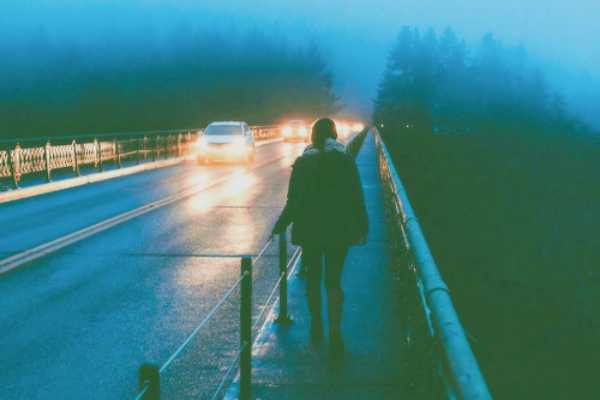 How to Overcome The Dark Night of the Soul Test — 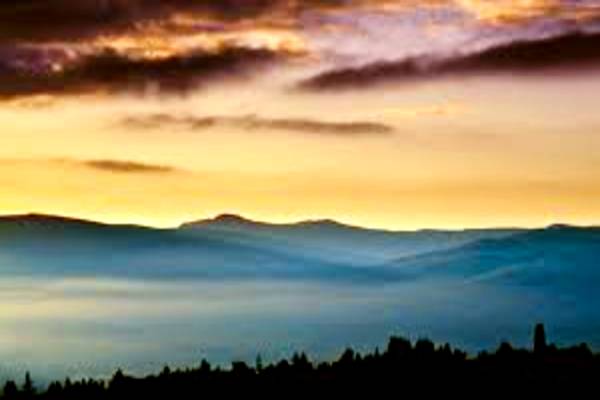